And then there were 14….
Today we had our first lost of an “adult chicken”. We had a few not making it out of “chick-hood” and while it was sad, we would be too lucky to have not experienced I still think of Doris and Zeus from time to time….would she still be like the lunch lady, falling asleep at the trough. Would Zeus still have an attitude WAY bigger than he was? I wonder what our “free, exotic chick” would have been…a top hat perhaps?
Today was not just like any other day. It was cold and foggy. Syringa had her hackles up the instant we walked out the door. She knew something was not right. I noticed, I even asked her. She stayed close by as we let the girls out. I collected the eggs and fed Mondo her special bowl of goodies and headed to the turkey field. I was there long enough to get them out of the coop and scoop the poop – then all hell broke loose. Squawking – loud! I threw the bucket down and took off running. By the time I got there, the feathers were still floating, I could hear it running – I had the coyote on the run. Feathers lead me down toward the clear cut. I never saw it, but I could follow the trail of feathers all the way to the small opening in the brush – a perfect hole – perfect for a coyote.
I heard nothing. Then I thought of the other girls. I ran back up to the house and used the only trick I know – Henny Penny meal worms – they are totally addicted and I’ve got them trained to come running when I sing, “girls!!!”. It’s really one of those great moments that never gets old, ever. I gathered the girls -9 – missing 6! Gotta get them in the coop. Luckily, they follow me and after some coaxing, they are all in. Quick count – missing 3 lacedwings (which I already knew one by the feathers) and Puffin (one of the Ameracuans). I ran back down the drive with the jar of meal worms, shaking and singing for the girls – nothing. I take a real good look around – no other feathers. Back to the coop, get them all out in the run and count – 5 Lacewings, 5 Welsummers and 3 Ameracuans. “Man…I wish you were tearing up my strawberries Puffin”, I even walk over to the garden to make sure she wasn’t. I go back over to give the girls a talk’n and I hear the beloved “egg song” – what the heck?! Who is in the coop? To my jubilance – it’s PUFFIN!! She was in the nesting box the entire time – the whole 10 minutes of it. I was so excited – I tried to get her to come out for the nesting box for a cuddle – she was not having it. I had violated her privacy and she was going to tell me all about it.
So one, we lost one. And then there were 14. We’ve been real lucky up ‘til this point. I sincerely hope that was the last meal we offer courtesy of the Smithshyre. The girls will be in lock down until we can get a better “safety” plan – apparently, 50 dryer sheets do not ward off a hungry coyote.
Oh, and I’ll be sure to listen to Syringa next time
Roni of the Shyre

On a more upbeat note.

Roni and I are making fresh pasta here at the Shyre. Someday we hope to market these wholesome, delicious noodles from heaven. For now we are simply getting used to some different recipes.

Pasta doesn’t make you fat. How much pasta you eat makes you fat. 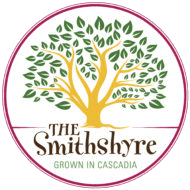