Starting this weekend, the Kidds will be performing their very own version of the beloved Nutcracker! They have been practicing all week to show you their moves. The story line might be a bit difficult to follow, but I think you’ll enjoy it.

Classes are open for Saturday and Sunday. Walk-up spaces may be available – please check schedule or call (360-271-0679) to make sure class is happening .

Dress warm, wear a cap and bring your friends so they can take pictures of you while you giggle. As always, professional instruction by our lovey Ms. Amanda and a short farm tour will follow class for those interested in learning more about The Shyre.

May your holiday be warm and joyous with love from friends and family… and baby goats.

We have announced our dates for the holiday season.

See our Goat Yoga page for all the details. Or on our events page at BPT.

We at The Smithshyre love the history we were blessed to buy into. We have applied to have our 1930’s barn register as a Heritage Barn. If we make the listing we will be eligible for a grant to preserve the barn. Here is part of the application.

The Carlson’s and later the Foss’ made important contributions to Kitsap Counties early settlement and agricultural heritage.

Carlson’s
It was 1882, Frank Carlson of Sweden came to the New World for a better life. Once in the Seattle area, he found friends from the old world “The Johnson’s”; Andrew, Oscar and Clara. In 1883, Frank and Clara were married and started a 160 acre homestead. They planted many fruit trees which still bear substantial fruit today. Frank and his brother Alfred cleared land and built a one room cabin right away. They then started work on a proper home. It was a log hewn building 2 stories with 2 large rooms. They had 5 children by 1903.

In the 1930’s the dairy barn was built. It had 10 milking stanchions. Most of the barn seemed to be dedicated to a hay shed. The hay grapple fork, hood and rail system are still in place. The hay shed floor is made of large logs split and placed unevenly as if to promote ventilation via the floor. The dairy half has a floor of large milled 12 x 4s. When we took possession in 2013 there were several vintage milking stools still in the barn. By 1940 the Carlson’s had all moved on and the farm was rented out for $25 a month.

Foss’
In 1915 Victor Foss married Hilma Sundberg, as a wedding present her grandfather bought them 40 acres from a lumber company near Poulsbo. They had 5 children by 1925, Russell was the second born, it was 1918. Victor became the communities favorite butcher and Russell helped his father often. They offered house call butchering.

Annie Jensen and Russell Foss got married in 1940 and moved into the “Old Carlson house” that was now empty. The place was in bad shape but rent was only $25. They fixed it up and by 1947 they had 4 children of their own. They were able to buy the house, barn and orchards with 40 acres from Mrs. Clara Carlson for $1,800 in 1942. Russell was exempted from the draft because their butchering service was so important to the community.

After the war in 1948 Foss and sons built a large slaughterhouse, “Foss Packing”. The business had an excellent reputation. By 1953 the county road on which the packing house was situated was formally named Foss Rd. N.E. The Foss’ ran cattle on their 40 acres and offered beef finishing services as well. The whole family worked at the packing house and it was a going concern until the late 1970’s. In the 1990’s the packing house became the Thomas Kemper Brewery, which is closed.

The “Old Carlson house” is a pile of weathered wood and other homesteading implements. Some 20 fruit trees still bear fruit and we love to share their story with guest and visitors. Roni and I bought 5 acres, the “Old Foss Farm” as locals call it, in December of 2013 from Nancy Foss (Russell and Annie Foss first born) to help pay for her assisted living.

Two Foss sons and their children remain on Foss land, each on five acres. Gordy Foss leases to us five adjacent acres. They all appreciated what we have done. We have returned vivacity and a fresh agricultural hue to the old farm. We have a pastured poultry business and a large market garden, we call it, “The Smithshyre”. We also keep Dwarf Nigerian dairy goats, American Guinea hogs, Narragansett turkeys and Finnish sheep. The Carlson’s and later the Foss’ made important contributions to Kitsap Counties early settlement and agricultural heritage. We are proud to continue this history.

The goats are almost ready for the primetime, but they need some more practice with people. These are introductory classes at a reduced rate.

Someday Spring will arrive. Today (3/22/18) is seems like old man winter is on his last gasp for the year. A rain and snow mix feel on the farm, only briefly. It didn’t not frost overnight even thought it was a clear night. Has the last frosty night come and gone?

My internal almanac hopes so.

Some food, the cold hardy stuff, is already in the ground; but I would love to get the grass seed going. We have some places to improve the pastures to provide more forage.

I did get some fencing up to create some paddocks and hay fields. We also got 14 apple trees in the ground (Thank You Lori Brakken) as part of the permaculture forest farm project. This fall I hope to get some replacement Chestnut trees in the ground.

The old Foss farm came with a great old dairy barn. We keep our dairy goat herd in the barn.

However, the barn needs a preservation project. The barn needs about $30,000 in work if it to remain standing. We have been award a Heritage Barn Initiative Grant. These grants require a 50% match so we still have some fundraising todo. But with the backing of the Washington Trust for Historic Preservation and the Department of Archaeology and Historic Preservation we will start work in the Spring of 2019. We hope to have the barn finished before hay season. We are planning another barn-raiser fundraiser for 2019 date TBD stay tuned!

Please check out our Heritage Barn Preservation Project page for the details.

We area asking people to donate via our Go Fund Me site. Here is the link https://www.gofundme.com/thesmithshyre. Thank you in advance for donating to our cause.

I have great blog post about the barn, its history and so forth click the link to check it out.

Our self serve farm stand is open all daylight hours.

This winter we have some ambitious plans.

We have 2 greenhouses (high tunnels) we need to build. The smaller high tunnel is almost finished. We only need to put the greenhouse film on the 20 ft. by 20 ft.

The large high tunnel is 30 ft. by 48 ft. These season extenders should help us grow more and better food for you! 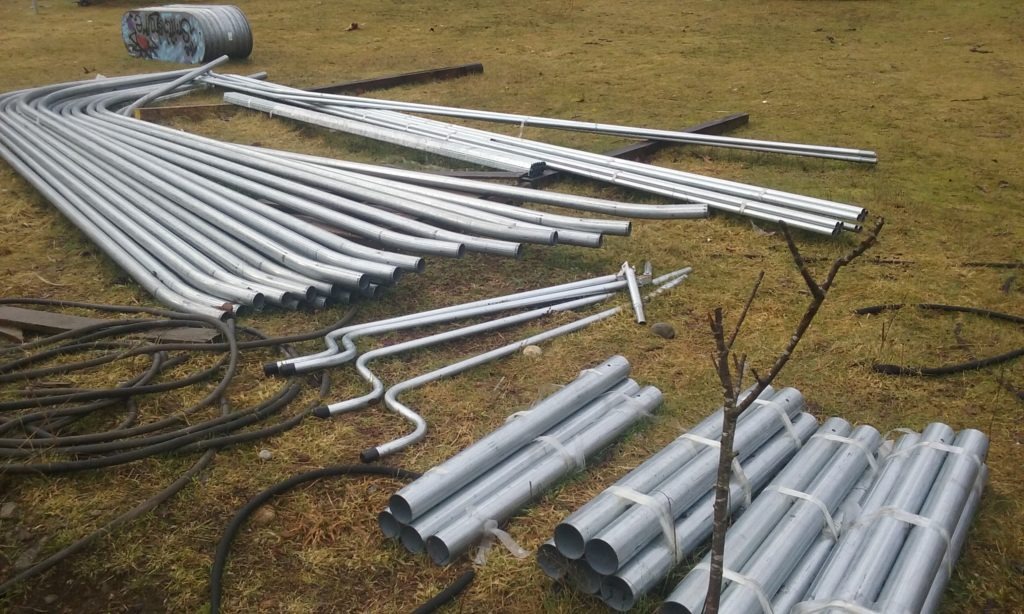 We also need to lay 700 ft of polyflex pipe and install 6 frost free yard hydrants. Right now we have a maze of garden hoses to feed both plants and animals. The hoses freeze in the Winter. This is a real pain.

Additionally, we need to finish up in our 4 main paddocks with better fencing and loafing sheds. Also, we have need to fence off several area of permaculture to protect it from the goats and sheep. 600 feet of fencing. Of course we have all the usual homestead task every Winter provides.

Thanks for staying in touch.

Is open for business during daylight hours. The farm stand does feature a reach in cooler and a self serve pay box. Exact change only please.

Built as a community effort the post are made of split Cedar. Our neighbor Jacob Foss donated the 3, 12 foot Cedar logs. We did the splitting in the driveway. The decorative walls are made from well weathered boards. These weathered boards date back to 1890’s when our land was first homesteaded by the Frank and Clara Carlson. To this day the original 2 story homestead lies in ruins. So we have been slowly going through it looking for good boards we can use for decoration. Jack Poz. a dear family friend, Benny Nebraska and our interns Devin and Rebecca all help built the farm stand.

Our farm and farm stand are located just north of Poulsbo, on Foss Rd. off Bond Rd. (SR307).

Well after 2 full years on The Shyre we had our most exciting Spring yet.

Our dairy goats (Dwarf Nigerians) had kids in late January, February and early March. 3 Does had 10 kids. 3 are does that we will keep here on The Shyre. We now have 5 does. We really enjoy our fresh raw goat milk. In fact the milk feeds not only the farmers but the pigs and puppies as well. See goat milk is the only universal milk, it can be feed to any other animal even a bunny or squirrel. This has obvious benefits. When we have an animal that needs extra milk or protein be it a goat kid or a turkey hatching, we can feed it goat milk. We fattened our yearlings (year old pigs) with it when our farm had little else as extra. (February and March). A ruminates ability to turn grass into protein is “Awesome” and a foundation of the homesteads / American agrarian past alike. Also raw milk has probiotics and healthy enzymes that are killed in pasteurization of conventional milk.

Having never farrowed any sows Roni and I learned fast. The sows did great, they co-raised the 12 piglets. These American Guinea Hog piglets will all be sold once they reach weaner age.

After keeping these sows and 3 other yearlings for about a year it is time for them to move to another farm. We used them systemically to plow pasture into gardens for growing some annuals. We are still focused on pasture productivity but wanted some additional gardens for annuals. Now their work is done we will need to find them a suitable new home.

Additionally, our Dakota had a litter of 10 puppies.

She is a second time mom who did great during her 12 hours of labour, 9pm to 9am that was along night. Roni and I have never helped a bitch whelp before so again we learned many things and fast. The puppies have been a delight and a royal pain all at once. We breed Dakota because Avalanche is so terrific. She and Aves are both 50/50 Great Pyrenees and Anatolian Shepherd. These are both Livestock Guardian Dogs (LGD) which have been breed of centuries to guard livestock. A good LGD is invaluable to a farm or homestead.

Our ewe Suri with lamb in the next few weeks (we hope). We have a turkey hen setting on a nest of 14 eggs. We also have pheasant and chicken eggs incubating. Busy time on the Shyre.

After a long Winter with few eggs are ladies are back! We have many dozens in the fridge, drop by the farm stand.

We feed our hens organic feed and they are pasture raised. $7 a dozen

Our feed “Scratch and Peck” is sourced within our bio-region “Cascadia” this is important to us a local food advocates.